Esther Rose Edwards (née Loewen) was born June 26th, 1918, and celebrated her 100th birthday surrounded by family and loved ones at Menno Place.  All four of her children, along with several grand children, great-grandchildren and even one great-great-grandchild, came for the afternoon to celebrate 100 years of Esther’s incredible life!

Born in Giroux, Manitoba, Esther spent all her early years in the prairies, eventually settling in Grand Prairie, finding work as a cook in the hotel. When she was 20 years old, she married Dale Edwards, and they moved to BC.

Esther and Dale were registered foster parents for many years – their house was like “Grand Central Station”, and Esther loved every minute of it! After fostering for several years, the Edwards’ agreed to care for several seniors from the community that needed help. Their house became one of the first “Assisted Living Care Homes” in the area. She was a master chef, and loved to cook and bake for all the people in her house. The cinnamon rolls, pies and cookies were never scarce and the grand-children knew where to find them. Esther cherished the opportunities she was given to love and serve everyone who came through her home.

Throughout her life, of most importance to Esther was her Church and her saviour Jesus Christ.  She never missed an opportunity to pray with her kids, grand-kids and friends and share the love of Jesus with anyone she met. Her love for Jesus and the impact that she made on her community is unmistakable, as many who have been impacted by her gathered to celebrate the legacy she has built.

_______
Congratulations on your centennial birthday Esther! We are honoured that you call Menno Place home. 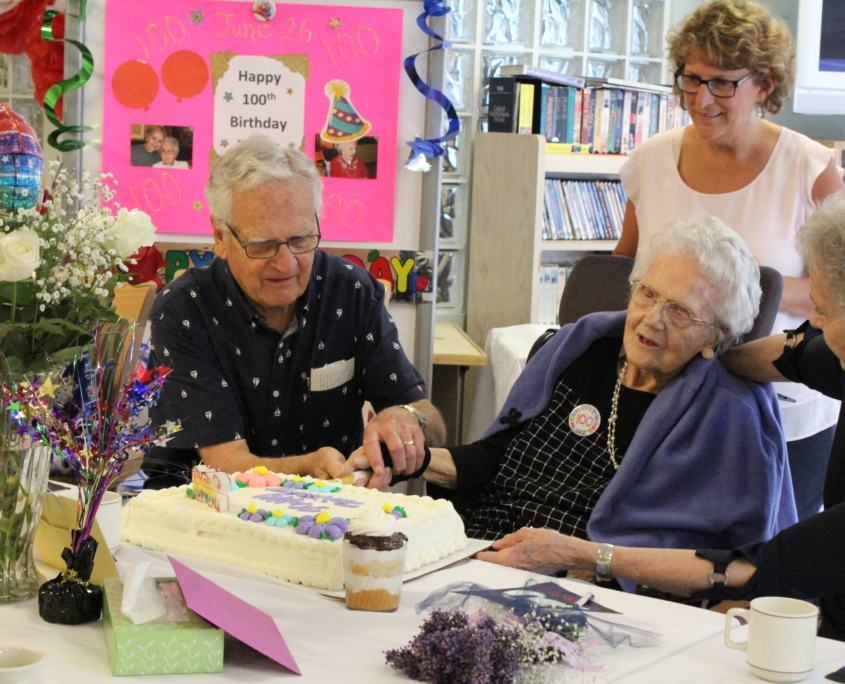 Esther and her son Lyle cutting her birthday cake!

We devote ourselves to instructing and building up one another by recognizing and celebrating excellence, effort and success
Canada Day Fun – June 29, 2018